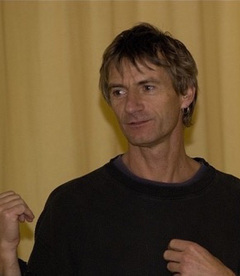 He has been living in Berlin from 1989 to 1991. There he went through an important part of his dance and movement training and was lucky enough to make a few absolutely crucial encounters. Most of all with Steve Paxton (1989) and Bonnie Bainbridge Cohen (1990). Since he first met them he never stopped studying with them. Together with Anna Halprin (whom he got to know a few years later) they stay the most important influences in his personal work. Since late 1991 he lives again in Switzerland and works in many European countries as well as in the U.S. for a great variety of people to show his performances, but most of all by teaching in order to share some of his experiences.