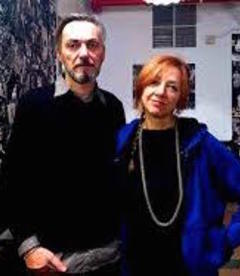 Motus was founded in 1991 in Rimini by Enrico Casagrande and Daniela Nicolò, the group burst onto the scene with productions wielding great physical and emotional impact and has always anticipated and portrayed some of the harshest contradictions of the present day. Throughout the years, the group has created theatre shows, performances, installations and videos, conducted seminars and workshops, taken part in interdisciplinary festivals. They’ve received numerous acknowledgements, including three UBU Prizes and prestigious special awards for their work. Freethinkers, Motus have performed all over the world, from Under the Radar in New York, to Festival Trans Amériques in Montreal, PuSh Festival in Vancouver, Santiago a Mil (Chile), the Fiba Festival in Buenos Aires, Adelaide Festival in Australia or Taipei Arts Festival in Taiwan, as well as all over Europe.

It has experienced and created hyper-contemporary trends in the theatre, performing authors such as Beckett, DeLillo, Genet, Fassbinder, Rilke or their beloved Pasolini, leading to their radical reinterpretation of Antigone in the light of the Greek crisis. The Syrma Antigónes project (2008) grew out of the idea of analyzing the relationship/conflict between generations, taking the tragic figure of Antigone as an archetype of struggle and resistance. The theme of revolutions in the contemporary world was finally eviscerated with Alexis. Una tragedia greca (Fall 2010) that had a long and successful world tour. This show was awarded the Critics’ Choice Award as “Best Foreign Show for the 2011-12 Season” by the Québec Association of Theatre Critics (AQCT). That same year, Enrico Casagrande, on behalf of the whole company, was nominated artistic director of the 40th Santarcangelo Festival. Starting in 2011, Motus has engaged in a new research path entitled Animale Politico Project in order to intercept worries, impulses, images and projections of the “Tomorrow that makes everybody tremble”, darting into an intricate panorama of revolutionary artists, writers, philosophers, comic artists and architects who have imagined the “Upcoming Near Future.”
The Plot is the Revolution was the first Public Act, a moving encounter between “two Antigones”, Silvia Calderoni and the mythical figure of political theatre, Judith Malina from The Living Theatre (July 2011). Nella Tempesta (May 2013) and Caliban Cannibal (October 2013) are a part of this itinerary interpolated by Aimé Césaire, which powerfully evoked the tragedy of emigration and created instant communities around the world.
For the first time, Motus in 2014 started working on the baroque dramatic-opera King Arthur (text by J. Dryden, music by H. Purcell) in the frame of the “Sagra Musicale Malatestiana” (Rimini 2014).
The show Nella Tempesta closed with the question Who does the Earth belong to? and from that issue the two directors embarked on a new project, asking themselves and the audience: Who traces borders? The new itinerary (2015-2018) tackles the theme of the border/conflict through various research processes. A path that starts with the performance MDLSX (2015), a solo with Silvia Calderoni on the right to non-belonging, to the freedom of transitioning from one gender to the other, with no barriers, demolishing every kind of prejudice. The journey continues with Raffiche (2016) and Über Raffiche (2017), with a reflection on the barriers inside the bodies, on identity, rebellion and the suspension of the will to define oneself.
With PANORAMA (2018) a new international production, with the actors of the Great Jones Repertory Company, from La Mama Experimental Theatre of New York. Motus claims the right to migration, interweaving new existential panoramas, where the migrant condition is converted into an intrinsic characteristic of existence, putting to the test any attempt to an identity definition.
All of Motus’ artistic work goes hand in hand with an intense program of public meetings, lectures and masterclasses at various Italian and foreign universities, in connection with the company’s complex theatrical and video projects.
In particular the directors of the company have been invited to hold a practical course at IUAV university in Venice in the frame of the MA course in Performing Arts (2018-2019); besides they have collaborated with La Manufacture - Haute école de théâtre de la Suisse Romande (HETSR) in Lausanne, since 2014. Since March 2018 the artistic directors of Motus have followed the 15 students of the acting BA to lead them in to the final show titled RIP IT UP AND START AGAIN, a deeply musical encounter between the young students and the still very lively germs of the post-punk culture.