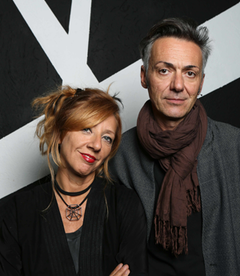 In 1991, Enrico Casagrande and Daniela Nicolò founded the Cie Motus in Rimini, Italy. Motivated by the need to confront today's themes, conflicts and wounds, they mix on stage art and civic engagement through images that have reactivated the visions of some of the most controversial "poets" of contemporaneity.

Active for more than 25 years, this group, which burst into the 1990s with productions with strong physical and emotional impact, has since anticipated and depicted some of today's harshest contradictions.

The company has experimented with and initiated ultra-contemporary trends in theater, directing authors such as Camus, Beckett, DeLillo, Rilke or their beloved Pasolini, until their radical reinterpretation of Antigone in the light of the Greek crisis, or Shakespeare's The Tempest, interpolated by Aimé Césaire, which forcefully evoked the tragedy of emigration and created instant communities around the world.

Enrico Casagrande and Daniela Nicolò have received prestigious awards, including three UBU awards and various special prizes for their work. Silvia Calderoni - their favourite actress - has been working with them since 2005 and has won numerous awards, including the UBU Award for "Best Italian Actress", the Elizabeth Turroni, Marte and Virginia Reiter Awards.

Motus has performed all over the world, from Under the Radar in New York to the Festival TransAmériques in Montreal, Santiago a Mil International Theater Festival (Chile), the FIBA Festival in Buenos Aires, as well as all over Europe. Their latest shows, MDLSX and Panorama, are currently touring internationally.

In 2019, the two directors directed the graduation show of the Class J of the Bachelor in Theatre, entitled "Rip it up and start again", which toured in Switzerland, France and Italy for about 20 performances during the summer.

In 2020, the duo is leading the 50th edition of the Santarcangelo Festival in Italy as artistic directors.