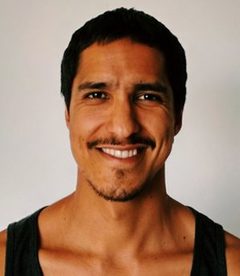 Fabián Barba was born in Quito in 1982, where he studied dance and theater, and worked as a professional performer. In 2004 he went to Brussels to join P.A.R.T.S. After graduation, he became a founding member of Busy Rocks. He has created two solo performances: A Mary Wigman Dance Evening (2009) and A personal yet collective history (2012). In collaboration with Mark Franko, he worked on Le marbre tremble (2014) and with Esteban Donoso on Slugs’ garden (2014). He also worked as a dancer for Zoo/Thomas Hauert.

In June 2016 he received his master degree in Autonomous Design in KASK (Ghent) graduating with honors (grootste onderscheiding).

Due to his ongoing research on the legacy of colonialism and dance history, he has been invited to give seminars and workshops in several European and American countries. Since 2013 he has been a guest faculty at the Middelburg decolonial summer school co-directed by Rolando Vázquez and Walter Mignolo.

Fabián is currently studying a master on cultural studies with a specialization in gender at the Universidad Andina Simón Bolivar in Quito-Ecuador.