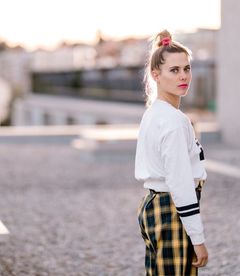 Marie-Caroline Hominal trained as a dancer at the Janet Held Studio in Montreux, then at the Swiss Ballettberufschule in Zurich and at the Rambert School of Ballet and Contemporary Dance in London. During her last year at the Rambert School, she joined the National Youth Dance Company.

She has danced for the Basel Tanztheater, Irene Tassembedo, Gisele Vienna, Gilles Jobin, La Ribot, Marco Berrettini (the Ifeel2 duo) and she participated in the projects Human Writes by William Forsythe and B.O.B by Dick Wong.