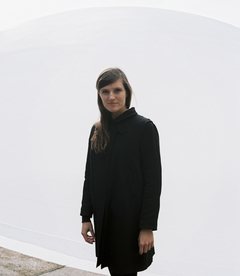 Born in 1976, Gisèle Vienne is a Franco-Austrian artist, choreographer and director. After studying philosophy and music, she trained at the École Supérieure Nationale des Arts de la Marionnette. Since then she has worked regularly with, among others, the writer Dennis Cooper, the musicians Peter Rehberg and Stephen O'Malley and the lighting designer Patrick Riou.

Ten plays directed by Gisèle Vienne tour regularly in Europe and around the world, including I Apologize (2004), Kindertotenlieder (2007), This is how you will disappear (2010), LAST SPRING: A Prequel, an installation for a robot doll (2011), The Ventriloquists Convention (2015) and Crowd (2017). In 2020, she created with Etienne Bideau-Rey a fourth version of Showroomdummies at the Rohm Theater in Kyoto, a piece originally created in 2001.

Gisèle Vienne is currently preparing a staging of Robert Walser's text Der Teich (L'Etang) which will premiere at the Théâtre National de Bretagne, in Rennes in November 2020 and will be presented at the Théâtre Vidy-Lausanne in May 2021.