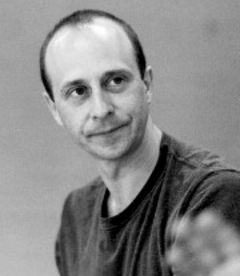 Jonathan Burrows danced with the Royal Ballet for 13 years before leaving to pursue his own choreography. His main focus now is an ongoing series of duets with the composer Matteo Fargion, which have gained an international reputation and continue to tour widely. The two are currently in-house artists at the Nightingale Brighton and their most recent performance "Body Not Fit For Purpose" had its world premiere as part of the 2014 Venice Biennale. Burrows and Fargion are contributing artists for William Forsythe’s Motionbank website project.

Other high profile commissions include work for for Sylvie Guillem, Forsythe’s Ballett Frankfurt and the National Theatre, London. Burrows has been an Associate Artist at Kunstencentrum Vooruit in Gent, Belgium, London’s South Bank Centre and Kaaitheater Brussels.

He is a visiting member of faculty at P.A.R.T.S Brussels and has also been Guest Professor at universities in Berlin, Gent, Giessen, Hamburg and London. His book ‘A Choreographer's Handbook’ has sold over 8,000 copies since its publication in 2010 and is available from Routledge Publishing. Jonathan Burrows is currently a Senior Research Fellow at the Centre for Dance Research, Coventry University.