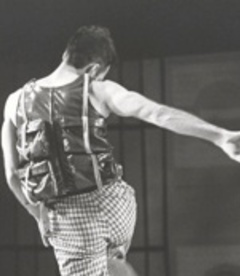 Jeremy Nelson trained at The London School of Contemporary Dance and went on to dance for The Siobhan Davies and Second Stride Dance companies in London before coming to New York in 1984.

He was a dancer with The Stephen Petronio Dance Company in New York from 1984-1992, returning as guest soloist in 1995. In 1991, he won a New York Dance and Performance (“Bessie”) Award for outstanding performance with that company and in 2004 was a recipient of a John Simon Guggenheim Memorial Fellowship for choreography.

He now works as an independent choreographer, teacher and dancer.

He was a Gowanus Arts Exchange Space Grant Recipient in 1994, a Movement Research Artist-in-Residence in 1994/1995, a 2003/2004 artist-in-residence at Dance Space Center in New York. In 2005 he received funds from Arts International’s Touring Pilot Program and in 2006 was awarded a NYFA BUILD Grant.

He has been presenting and performing his choreography in New York since 1994, and has shown his work several times at Movement Research at Judson Church and in the Lincoln Center Out-of-Doors series. He has been produced on five occasions to create work in shared programs for various New York venues including Danspace Project in 1995, 1996 and 2000, and PS 122, in 1998. In 1999 he presented Morphylactic, a collaborative choreography with Luis Lara at Dance Theater Workshop. He has shown a full evening of his own work at Danspace Project in 2002, 2004, and 2008, and at Dance Theater Workshop in September of 2006. In 2009 he presented a shared solo evening as part of the Harkness Dance Festival.

Since 1994, he has also had the opportunity to show his work at venues outside of New York, including the International Dance Festival at Connecticut College, the Painted Bride in Philadelphia, and Bennington College. Performances outside of the United States have included Casa del Artista in Caracas, Venezuela, La Porta in Barcelona; Studio 303 and Tangente in Montreal, TanzFabrik in Berlin, Teatro Mapocho in Santiago de Chile, Taffelhalle in Nurenberg, Germany and Die Pratze Theater in Tokyo. Performances in 2005 included The Full Moon Festival in Oulo, Finland; The Riley Theatre in Leeds, England; Pomona College in California; Montevideo Sitiada Festival in Uruguay; Rafaela and Buenos Aires, Argentina; and Danzalborde Festival in Valparaiso, Chile. Recent performances included the Bratislava in Movement Festival in Slovakia; the Tensdansa Festival in Terrassa, Spain; Festival de Danza Nueva in Lima, Peru; and the Danza Urbana Festival in Monterrey, Mexico.

He has been commissioned to create works on companies such as Espacio Alterno in Caracas, Venezuela, Xoroftes in Athens, Greece, Ricochet Dance Company in London, England and Footnote Dance Company in New Zealand; in the U.S, on the repertory company, Gotham Group and students at Connecticut College. In November 2002 he created “The Fact that it goes Up” for Phoenix Dance Company in Leeds, England. It was performed as part of a national tour in 2003 that included venues such as Sadler’s Wells Theatre in London. In December 2003 he created a new work for the Northern School of Contemporary Dance, also in Leeds, England.

He is a member of the teaching faculty at Movement Research in New York and a guest artist at Connecticut College. In the United States, he has taught as part of the American Dance Festival, and at various universities including New York University Tisch School of the Arts and Bennington College. He has been invited to give classes to several internationally recognized companies including Anna Teresa de Keersmaaker’s ROSAS in Brussels, Sasha Waltz Company in Berlin, and Siobhan Davies Dance Company in London. For the last twenty years, he has been teaching classes and workshops in over 30 countries around the world at many studios and festivals including ImPuls Tanz in Vienna, P.A.R.T.S. School in Brussels, Escuela Nacional de Danza Clásica y Contemporánea in Mexico, SEAD School in Salzburg, Instituto de Bellas Artes in Cuba, International Summer School of Dance in Tokyo, DansensHus in Copenhagen, Tanzwerkstatt in Munich, The Northern School of Dance in Leeds and the Kalamata Dance Festival in Greece among many others.

He was the Head of Dance at the Danish National School of Performing Arts from 2009 - 2015 and is presently Associate Arts Professor in The Dance Department of New York University’s Tisch School of Arts.