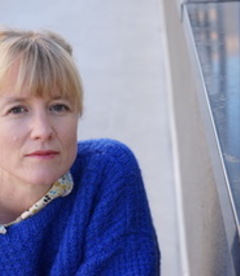 Born in Belgium in 1981, Julie-Kazuko Rahir began her studies with a Master's degree in Modern Letters at the ULB (Université Libre de Bruxelles), then at Paris IV-Sorbonne, during which she wrote her dissertation on the theories of theater in French-speaking Belgium under the direction of Denis Guénoun (2000-2004). She then began training as an actress at the Manufacture (2004-2007).

Combining theory and practice, she then collaborated with Danielle Chaperon (UNIL) and Christian Geffroy Schlittler: together, they carried out a research project around the question of emotions and more precisely the rehabilitation of "pathos" in the theater (from 2009 to 2013). Exploring the actor's tools in many directions, this research has been a determining factor in her approach to the stage.

Curious and eager to continue, she then decided to perfect this laboratory, to enrich her knowledge from a new point of view: through a concrete, "somatic" approach, interested in learning how to become aware of the sensitive body in movement in relation to the environment. Thus she began a 4-year training in the Feldenkrais Method® at the Feldenkrais Training Institute in Lyon (IFELD). After a theoretical theatrical approach (at the university), then a practical one (at the Manufacture), she discovers the universe of perceptions, of attention, that of the brain closely linked to the body, that of movement in consciousness.

Today she continues her theatrical research more specifically related to this method: how to be a more conscious and creative actor, how to make better use of the brain's strategies to explore a thought embodied on stage. Since January 2020, she has been conducting a research project at the Manufacture between Theatre and Feldenkrais: "What are the tools of the Feldenkrais Method relevant to the actor in the theater?".