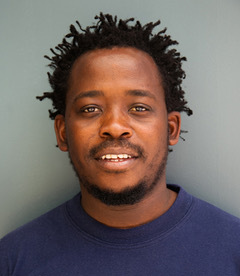 The Mozambican dancer and choreographer is the artistic director of the dance company which bears his name. Horacio Macuacua develops projects that aim to go beyond established forms. Flexibility of mind and availability to catch the moment translate movement instantly into compositions that are complex and elaborated, displaying depth and playfulness, darkness and light. Each composition is a journey to reinvent and transform within the parameters of meaning.

He has carried out projects at the following events: COMUM, Canais, Orobroy, Stop! (1st Prize and Puma Creative Prize at Danse l’Afrique Danse Festival 2010), Smile If You Can!, Fighting room, Convoy, Paradise is not in the sky! and Theka.