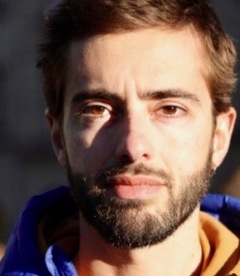 Born and raised in Napoli, Vittorio graduated from the Ecole Atelier Rudra Béjart Lausanne in 2002.

During the following years he danced for several ballet and contemporary dance companies, such as the Béjart Ballet Lausanne, the Teatro alla Scala di Milano, the Compagnia Aterballetto, and collaborated with several choreographers, such as Maurice Béjart, Mauro Bigonzetti, William Forsythe, Ohad Naharin, Andonis Foniadakis, Alexander Ekman, and Johan Inger among many others.

After the encounter with David Zambrano in 2008, Vittorio’s interest shifted to different ways of expressing his passion for dance. Since then he works as a freelance performer and assistant choreographer in collaboration with swiss-based and international artists coming from very different artistic backgrounds. Alongside his work as a performer and assistant Vittorio teaches Flying Low regularly at Tanzcompagnie Konzert Theater Bern and in several companies and education programs in Switzerland, Germany, Italy, Belgium and France.

In 2015 he co-founded with Marion Zurbach the dance-theatre company Unplush. In 2018, he achieved the MAS program in Dance Science at the University of Bern.