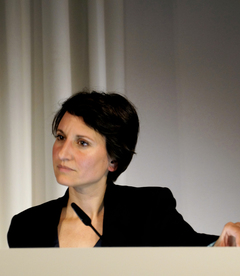 Stage director and researcher, Frédérique Aït-Touati leads a work at the crossroads of theater and history of science. A doctor of comparative literature, she trained in the history of science with Simon Schaffer in Cambridge. She taught at Paris IV-Sorbonne (2004-2007) and then at Oxford University (2007-2014) before becoming a researcher at the CNRS.

Frédérique Aït-Touati has published "Tales of the Moon, Essay on Fiction and Modern Science" (Gallimard, 2011, Fictions of the Cosmos, Chicago UP, 2011), "Stories and Knowledge" (Peter Lang, 2012), with Anne Duprat and "The World in Pictures", with Stephen Gaukroger (Garnier, 2015). She is currently working on an essay on theater and the representation of space in early modern and contemporary times.