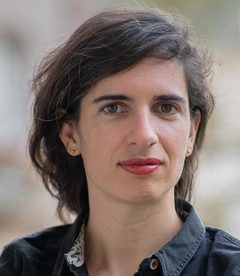 Lea Moro is a Swiss choreographer, dancer, lecturer and cultural manager, based in Berlin and Zurich. She studied at the Accademia Teatro Dimitri (BA in Physical Theatre), LABAN Centre London (Diploma in Dance Studies) and graduated 2014 from the Inter-University Centre for Dance Berlin (BA Dance, Context, Choreography).

Her choreographic work tours internationally to renowned venues. Her group piece (b)reaching stillness (2015) was selected for the Tanzplattform Deutschland in 2016 in Frankfurt am Main and the Swiss Dance Days in Geneva in 2017. Her solo performance Le Sacre du Printemps, a ballet for a single body (2013/14) toured internationally a.o. to the Colombo Dance Platform Sri Lanka, Festival Solos al Mediodía in Montevideo, HAU Hebbel am Ufer Berlin.

Lea Moro was resident choreographer at the K3 — Zentrum für Choreographie | Tanzplan Hamburg between 2015 — 16, developing her solo musical The End of the Alphabet. In the season 2017/18 she was Associated Artist at the Tanzhaus Zürich. In 2017 she developed the group piece FUN!, which was chosen for the Swiss Dance Days 2019 in Lausanne.