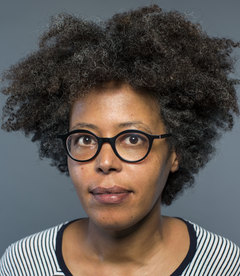 Sahar Suliman lives and works between Geneva, Vaugondry and Cairo.

After obtaining a Bachelor's degree in cinema/video orientation at the Geneva University of Art and Design (HEAD-Geneva), she developed her artistic research by moving it to her country of origin, Egypt.

In Cairo, she produced several works and enriched her approach by confronting it with a new artistic environment. Through her projects, she explored themes such as: women in the public space, collective memory, cultural references and social structures versus family structures.

Her work has been presented on various occasions and in various venues, such as the Halle Nord and the Palais de l'Athénée in Geneva, the Carré d'Art in Nîmes, the Swiss Institute of Contemporary Art in New York, the Swiss Art Awards in Basel, Twonhouse in Cairo and recently at the Visions du Réel festival in Nyon.

By integrating the Master Théâtre of The Manufacture, she has again shifted her research to experiment with new visual perspectives and raise questions in the space and time of the Theatre.

The image and the link, in all their forms, are always at the centre of her research.