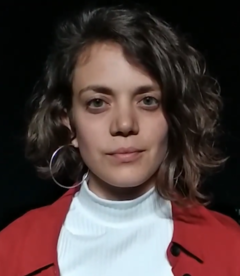 Clémentine Colpin is a director, actress, researcher and teacher.

She is a graduate of the Master in Dramatic Interpretation of the IAD (Belgium) and of the Master in Theatre Direction of La Manufacture (Switzerland). She is co-founder of the Compagnie Canicule alongside Pauline Desmarets and Olivia Smets.

Since 2015, she has been directing or collaborating in the direction of shows between Belgium and Switzerland. In particular Save the date, a free adaptation of Chekhov between theater and concert; La Cagnotte, a contemporary vaudeville (co-directed with Christian Geoffroy Schlittler); Peter, Wendy, Time, the Others, which mixes a fictional play by a professional actor and actress with the real life experiences of two non-actors who change every night.

With the Compagnie Canicule, she collaborated on the creation of Que fait une fait une fille si charmante toute seule ? and then Métagore, two short travelling forms in a car; as well as Ublo, a poetic fable for young audiences on autism; and Métagore Majeure, an outdoor show where spectators are equipped with headphones, based on Booba's rap.

She also works in the field of artistic research and teaching, particularly on the links between audio-visual editing and directing. She has led a research project on the notion of faux-raccord within the Research mission of La Manufacture. Between 2018 and 2021, she is several times a speaker at La Manufacture for the students of the Master Théâtre, Direction and Scenography orientations.

For years, she has also been giving workshops for vulnerable and/or specific audiences.