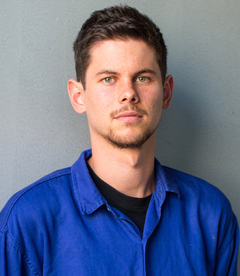 Jean Daniel Piguet is a stage director and performer. He was born in Geneva and grew up in the countryside in the southwest of France. He studied philosophy and documentary film in Toulouse, Paris, Montreal, then joined the Master's degree in stage direction at the Manufacture HETSR, in Lausanne. There he conducted practical and theoretical research on the writing of the reality. Since his graduation in 2016, he has participated in four projects in the Research Department of the Manufacture: "Création Partagée", "Actions", "Jouer les archives", Ecrire partir".
His works - Passe, Pas Perdus, Memoria Libera, Partir - question the fictional potential of the reality that surrounds us by looking at daily interactions as a place of possibilities and fantasies. He works with several artist friends as artistic collaborator, dramaturge or performer, including Rémi Dufay, Yan Duyvendak, Mélanie Gobet, Oscar Gomez Mata, Maxime Gorbatchevsky, Mélina Martin, Camille Mermet, Floriane Mésenge, Nicolas Zlatoff.
Interested in questioning the link between theater and social issues, he follows two courses of La Marmite - artistic, cultural and citizen movement - as an associate artist. In 2020, he was awarded the Leenaards Grant, which helped him develop his artistic residency in his childhood village of Negrefoyt.