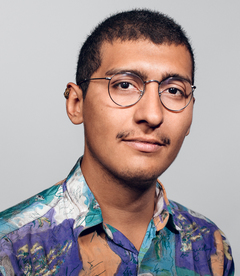 Ludovic Vial works as a transdisciplinary artist between the fields of theater, performance and dance. During his studies, he trained with choreographers Philippe Saire, Alessandro Sciarroni and Simone Aughterlony, as an assistant. He also directed a short film with Clément Schneider and students from the ECAL. In 2020, he directs with colleagues of his class the opera Angélique, the adaptation of the novel L'invention de Morel, and the play Par-dessus bord by Michel Vinaver, at the Théâtre populaire romand. In 2019, he graduated from the Haute école d'art et de design - Genève in visual arts. There, he presents the opera Iceberg, declined in 2018 and 2019 at the ACT festival, at the Arsenic, at the Dampfzentrale, at the Théâtre Saint-Gervais, as well as during the exhibition Invaders, at L'Abri.