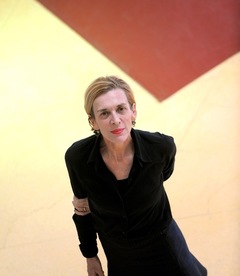 Mathilde Monnier occupies a place of reference in the French and international contemporary dance landscape. From piece to piece, she thwarts expectations by presenting work that is constantly being renewed.

Her nomination as head of the Centre chorégraphique de Montpellier Languedoc-Roussillon in 1994 marked the beginning of a series of collaborations with personalities from various artistic fields (Jean-Luc Nancy, Katerine, Christine Angot, La Ribot, Heiner Goebbels...).

In 2014 she is appointed to the general management of the Centre national de la danse in Pantin until June 2019.

In 2020, she creates the piece "A Dance Climax" for the first part of the graduation show of the Bachelor in Contemporary Dance D class.