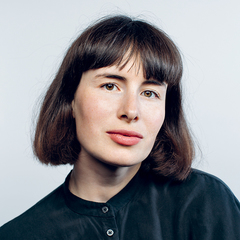 Giulia Rumasuglia was born in Geneva in 1992. After studying Russian and French literature at the Universities of Geneva, Lausanne, and Humboldt in Berlin, she trained as a performer in Copenhagen for three years. Her professional engagements took her to Scotland and then Switzerland at the Schauspielhaus Zürich, where she worked with Herbert Fritsch as assistant dramaturg, and to the Grand Théâtre de Genève, where she participated in the opera "Die Entführung aus dem Serail" directed by Luk Perceval. She then worked at Pro Helvetia in the Performing Arts departmend and joined the Master's degree in Stage Direction at the Manufacture in September 2020. She has since been engaged to collaborate with Katie Mitchell and is an artistic assistant for the collective Rimini Protokoll. Her research focuses on sound and the manufacture of silence in theater.