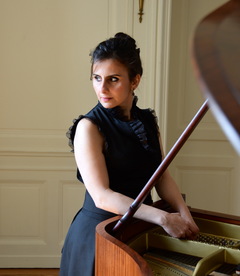 The Iranian pianist Layla Ramezan has always sought to create links between her Persian origins and the contemporary music she plays daily.

She began her musical and pianistic education in Tehran with Mustafa-Kamal Pourtorab, Raphael Minaskanian and Delbar Hakimova. After arriving in Paris in 2001, she continued her training as a scholarship holder of the Albert Roussel Foundation at the École Normale de Musique de Paris Alfred Cortot, the Conservatoire National de Saint-Maur des Fossés and Créteil, where she obtained a Diploma of Musical Studies with high honors. In Lausanne, where she currently lives, she obtained two Masters in interpretation and accompaniment at the Haute École de Musique.

Also pianist of Matka, a contemporary music ensemble based in Geneva, she regularly participates in intercultural exchange projects linked to the international community: she played at the United Nations in Geneva for a special event against violence against women, she was the instigator of several musical exchange projects with Iran such as conferences, residencies and concerts bringing together Iranian, French and American composers, and she was a member of the jury of the 10th edition of the National Festival of Music for Young People in Tehran.

Layla Ramezan is a laureate of the Engelberts Foundation for Art and Culture in Switzerland and the Albert Roussel Foundation in France. She is also supported by the City of Lausanne.