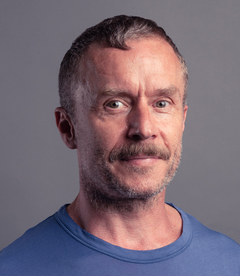 Born and raised in Switzerland, Thomas Hauert studied at the Rotterdam Dance Academy in the Netherlands. He moved to Brussels in 1991 to work in Anne Teresa De Keersmaeker’s company Rosas. He then collaborated with David Zambrano, Gonnie Heggen and Pierre Droulers. In 1998, he founded his company ZOO. Their first performance, Cows in Space (1998), was awarded two prizes at the Rencontres chorégraphiques internationales de Seine-Saint-Denis. Since then, Hauert has created around 20 performances with his company.
In addition to his work for ZOO, Hauert was commissioned to create pieces for external structures like P.A.R.T.S., the Trinity Laban Conservatoire of Music and Dance, the Zurich Ballet, Toronto Dance Theatre…
Thomas Hauert has developed a teaching method from his choreographic practice. As a teacher, he has an ongoing collaboration with the P.A.R.T.S. academy in Brussels and regularly gives workshops worldwide. In 2012–13, he was the guest professor for dance and performance at the Institute for Theater Studies of the Freie Universität of Berlin. In 2013, he was chosen to be the academic head of the new Bachelor in Contemporary Dance that was created at Manufacture – University of performing arts in Lausanne.
Thomas Hauert is resident artist at Charleroi Danses and associated artist at Kaaitheater Brussels.
The work of Thomas Hauert first developed from research on movement, with a particular interest in improvisation-based processes exploring the tension between freedom and constraint, individuals and the group, order and disorder, and form and formlessness.