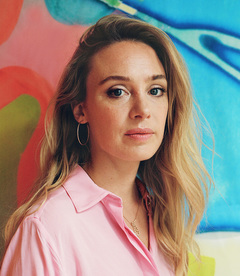 Laetitia Dosch has a degree in translation of English literature, a Bachelor's degree in theater from La Manufacture, and took classes at the Cours Florent.

At La Manufacture, she writes her first play, Le Bac à Sable and meets Marco Berrettini and La Ribot, with whom she will work on several plays, participating in the writing. In the theater, she collaborates with Eric Ruf, Yves-Noël Genod, the 2B Company, the Chiens de Navarre, Mélanie Leray, Katie Mitchell, among others.

At the same time, she develops her own work. She created Laetitia fait péter... then Klein with Patrick Laffont at the Ménagerie de verre in Paris as part of the Etrange Cargo festival in 2014. In 2015, she creates with the collaboration of Yuval Rozman Un Album, inspired by the Swiss humorist Zouc at the Théâtre de l'Arsenic. In 2016, at the invitation of the Festival d'Avignon and the SACD, she creates with Jonathan Capdevielle Les Corvidés for the Sujets à Vif, a show they will write together at the table. In 2018, a new collaboration with Yuval Rozman is born: HATE created in June at the Théâtre Vidy-Lausanne.

In 2022, Laetitia Dosch will direct the graduation show of the Bachelor Théâtre L class, EN FINIR! which she will co-write with the French writer Édouard Louis based on his books.