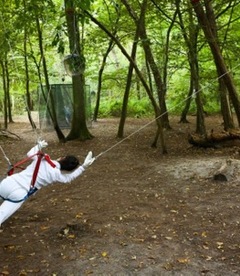 The Busy Rocks collective came into being in 2008 as a result of the shared interests and mutual influence of five modern dancers who had just finished their dance training at P.A.R.T.S. Franziska Aigner, Fabian Barba, Marisa Cabal, Tuur Marinus and Gabriel Schenker got to know each other and each other’s work during the four years they trained together, and wanted to continue their collaboration in the professional field, without allowing it to stand in the way of their individual careers.

What links them is their common interest in exploring different ways of producing and perceiving movement. This leads to different proposals of what a dancing and moving body can be. Through these interests, expectations that arise when bodies appear on stage are challenged and played with. The common perception of the dancer as a virtuoso self-propelling body, moving freely through empty, resistance-less space is challenged. They go in search of new challenges for the dancer/performer, both within the space and outside it.

works for Busy Rocks, but has also collaborated with Billy Bultheel, Enad Marouf, Daniel Jenatsch and Samuel Forsythe under the name New Forms of Life, as well as dancing for choreographers like Mette Ingvartsen and Alexandra Bachzetsis.

worked with Busy Rocks on the creation of Dominos and Butterflies (2009) and Studium (2010). In addition to this, he is mainly occupied with his individual career, with his first solo performance, A Mary Wigman Dance Evening (2009), attracting international interest. 2012 saw the premiere of a personal yet collective history (2012), in which he works with material from a range of choreographers.

has, as a founding member, been closely involved with many Busy Rocks productions, including keeping busy keeping still. For Still Animals (2012) he designed a choreography in which he staged complex floating ‘animal constructions’ that allowed the dancers to imitate the walking patterns of animals and humans.

has participated as a choreographer and performer in Throwing Rocks (2008), Under the Influence (2009) and Dominos and Butterflies. In addition, he has worked with Thomas Hauert/ZOO, Anne Teresa De Keersmaeker/Rosas, Doris Stelzer and Eleanor Bauer.