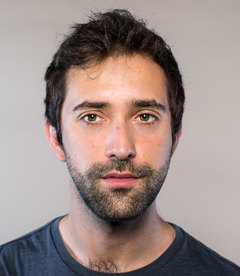 Edwin Halter studied Performing Arts at the University Paul Valery, Montpellier III. At the same time, he trained as an actor at the CRR of Montpellier and with Pina Wood in the collective Les Gueules de Loup.

In 2018 he assists Pierre Maillet in the direction of "One night with Holly Woodlawn" and joins the Master Théâtre orientation Mise en scène of The Manufacture. He develops a particular affinity with the works of Loïc Touzé, Guillaume Béguin and Yves-Noël Genod. His master thesis is entitled "Étrange animale aquatique nocturne". It deals with chimeras, dark ecology and an ocean of unresolved issues.

In 2019, he assists Jonathan Mallard in directing the show "Les îles Singulières", inspired by the novel "Le Sel" by Jean-Baptiste Del Amo, at La Comédie de Saint-Etienne. He will soon collaborate with Raphael Mars on an adaptation of Seneca's "Phèdre" as a musical show.

He has recently developed a passion for sea sponges.