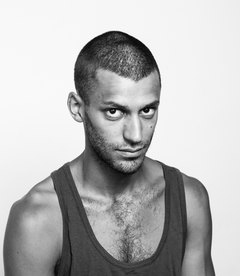 Born in 1990 and originally from Yverdon-les-Bains, Marc graduated in 2012 with a Bachelor's degree in movement theater at the Accademia Teatro Dimitri, then left for six months in China to practice martial arts intensively. Through his regular practice of parkour (free-running), martial arts and circus acrobatics, Marc began to take a close interest in the study of movement in general and dance in particular. For two years, he worked as an actor (with Grigorij Lifanov and Samuel Schwarz, company 400 ASA) while continuing to train as a self-taught artist.

In 2014, he enters La Manufacture, and is part of the first batch of students of the Bachelor in Contemporary Dance. In 2016 Marc proposes to the Quarts d'Heure de Sévelin his first solo based on physical risk Take Care of Yourself (supervised by Lionel Baier), which is selected for the Tanzfactor 2018 tour and then - following the BE FESTIVAL - for two tours in Spain and the UK.

In 2017, he creates Palette(s) with Cédric Gagneur and works as a dancer/acrobat performer for Youngsoon Cho Jacquet. In 2019, the now artistic director of Cie Moost creates a second solo, "Les Promesses de l'incertitude", with musician Raphael Raccuia. In 2021, he creates " Lab Rats ", a duet with Owen Winship, as part of La Bâtie-Festival de Genève and is awarded the Prix de la relève de la Fondation vaudoise pour la culture.