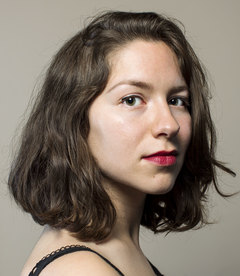 Born in Paris to a Brazilian mother and given a Polish surname, Lou Ciszewski studied Philosophy and English Literature at the University of Geneva. She continued her studies with a CAS in Dramaturgy and Text Performance (Lausanne) in 2018, and then obtained her Master's degree in Directing at La Manufacture (Haute école des arts de la scène) in 2020.

She wrote and directed her first play in 2015. Then collaborates with the association Stop Suicide for a performance in 2016.
In 2018, she creates Carré Rond, a multidisciplinary show where she applies a process of "joint writing". For her diploma work at the Manufacture - Ce que vous voudrez - she adapts Shakespeare's Twelfth Night into a musical.

In 2021 she founded the company La Meute and presented Bolts of Melody, a stage creation based on Emily Dickinson's poems. She is currently developing her writing through two projects: Miettes, an original comedy and Vague(s), a collection of sound poetry.

She is also an assistant director with Yvan Rihs, Joël Maillard, Olivia Csiky Trnka; and was a production assistant at Rita Productions.