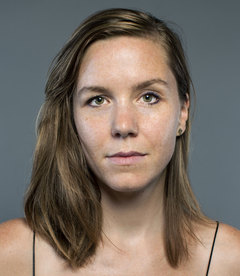 Sarah Eltschinger was born in the countryside in 1988 in Switzerland. After obtaining a Certificate in Dramatic Art at the Conservatoire de Fribourg and a Bachelor's degree in Literature and Linguistics, she decided to enrol at The Manufacture in 2018, thus completing her first Master's degree in History and Aesthetics of Cinema obtained at the University of Lausanne in 2015.

Sarah Eltschinger works in parallel in the worlds of theatre and cinema, reflecting on the bridges between these two media, particularly with regard to the place of the actor.

Assistant director in film and theatre, she has worked with Bruno Deville, Xavier Beauvois, Philippe Saire, Alexandre Doublet and Marinka Limat. In the spring of 2019, she directs the short film "Women" in co-production with the Cornland Studio company in Geneva. With her company I D A, she questions social determinism and freedom in the human condition.